2005 was my first trip to Cambodia and I came as a volunteer with the Lower Mekong Archaeological Project (LOMAP) with Dr. Miriam Stark at the University of Hawai’i. This trip had a major impact on my academic career trajectory. I had just finished my first year of graduate school and was almost 100% sure I was ready to focus my research in Southeast Asia, but wasn’t quite sure what to expect having never been here. I spent an amazing summer based in the city of Angkor Borei in Takeo Province doing survey with LOMAP, and by the end became quite sure that I was ready to focus my research here. I’ve spent the time since learning Khmer, taking my quals, finishing classes, writing my dissertation proposal, teaching, applying and receiving funding and now finally here doing PhD research.

Angkor Borei is a large site in the Mekong Delta region of Cambodia, not far from the Vietnamese border. It is believed to have been one of the capitals of a pre-Angkorian kingdom the Chinese called Funan. It was linked by a sophisticated canal system with a similar site in Vietnam called Oc Eo. Oc Eo was excavated in the 1940s by an archaeologist named Louis Malleret with the Ecole Francaise d’Extreme Orient (EFEO). Angkor Borei was known to the French and mapped by them but archaeological research did not begin in earnest until the 1990s with LOMAP. Prior to this project most of the evidence about this site and the kingdom of Funan were known from Chinese historical documents and the brief excavations undertaken by Malleret. There are still more questions than answers but it does appear that this site was inhabited as early as a few centuries BC (2nd or 3rd C) continuously through the Angkorian period (9th-15th century AD). [The LOMAP project and Miriam Stark’s webpage (linked above) have links to PDFs on articles about Angkor Borei and the LOMAP project.]

My PhD research includes materials from Angkor Borei and it is definitely one of the most important archaeological sites in Cambodia. Recently while checking out Google Earth I noticed that higher resolution images had been posted of this area and I couldn’t resist sharing them along with a very brief background and some photos from my trip in 2005. Read on below. 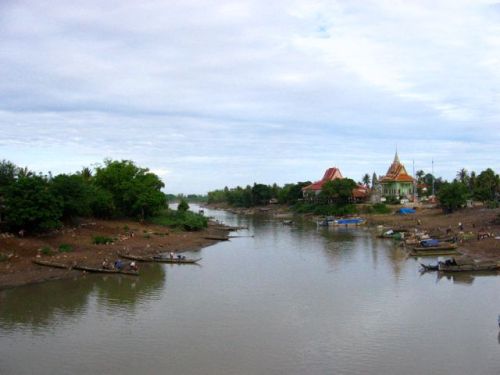 Let’s start off with this great Google Earth image of Angkor Borei town. 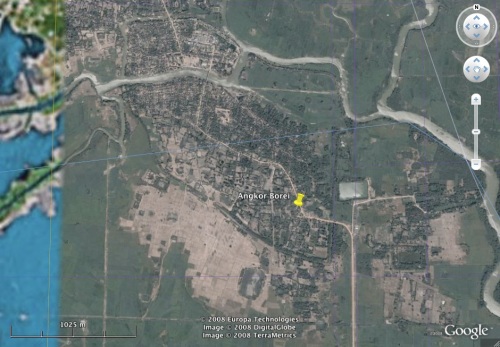 If you’d like to find this on your own version of Google Earth (and see things in more detail) here are some coordinates.

You should be able to see the outline of the wall and moat system that surround the city. Research is currently being done to determine the age of these features and how they were constructed. If you want some help picking out the walls and features here’s a map drawn from a 1999 article.

The wall that surrounds Angkor Borei is quite large and made out of baked brick. While we were there someone had made a cut into the wall to build a house and allowed us to inspect it a bit more closely.

Here’s a small panorama photo of only a part of the wall. It’s about 20 meters wide and 5-7 meters tall.

The town is still inhabited today and a few very small portions of ancient brick foundations were mapped and surveyed by LOMAP in earlier field seasons but very little remains today. However within the wall was a fairly substantial archaeological feature that was being regularly looted for brick and stone building material. This was known to villagers as Phnom Toich (or small mound).

Above: In this photo we visit part of Phnom Toich that was being looted. We’re standing in a giant crater that has been created by digging and looting for stones. Those stones were part of an ancient wall or some kind of foundation feature.

Above: Villagers encountered artifacts in the process of taking apart this mound. Above is a stone yoni sitting near a spirit house.

Above: This is what was being done to the stones being looted from the site. They were being pounded into gravel which is in turn used in house construction. It is a tedious job and performed by the very poor. These people had lost their farmland due to a family illness. It’s hard to convince people to stop looting archaeological sites when they have almost no other options.

As I mentioned above Angkor Borei was linked to other sites on the landscape and specifically the site of Oc Eo through a series of canals. They were first identified by another French scholar, Pierre Paris, in the 1930s while he was doing aerial survey in the region. Work is still being done to determine the construction and use-life of these canals (again see Dr. Stark’s site for links to more articles). Below is a recent map of some of those canals on the landscape (note Angkor Borei in the upper right-hand corner).

From: Bishop, Sanderson, and Stark 2003 OSL and Radiocarbon Dating of a Pre-Angkorian Canal in the Mekong Delta, Southern Cambodia. Journal of Archaeological Science 31(3):319-336.

And here’s a Google Earth Image : 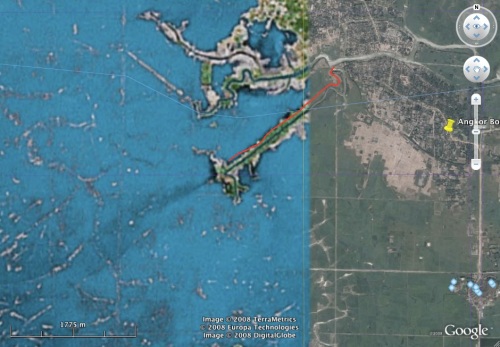 This image sits on the edge of the hi-res area over Angkor Borei and the surrounding landscape. The older image was taken during the rainy season when this whole area is under water. In this image AB is in the upper right hand corner as with the drawing above and one of the canals, called Paris 1 in the article above, is clearly visible (I traced next to it in red to help you see).

Unfortunately Oc Eo is not nearly so distinct or impressive from Google Earth. I had a hard time spotting it and am still not quite sure if I’ve got it figured out. Here’s one view from Google Earth:

Not nearly as obvious as Angkor Borei from the air! In this next shot I zoomed in and I *think* one can make out what looks like a rectangular wall around part of the site.

I think that is a little more clear but I’m still not 100% sure this is it.

Here’s a Google Earth Image of the whole region so you can see how far apart the sites are. The yellow line is the Cambodia-Vietnam border. The sites are marked with thumb-tacks.

One last spot to check out is the “mountain” of Phnom Da just outside of Angkor Borei town. Here it is on Google Earth: 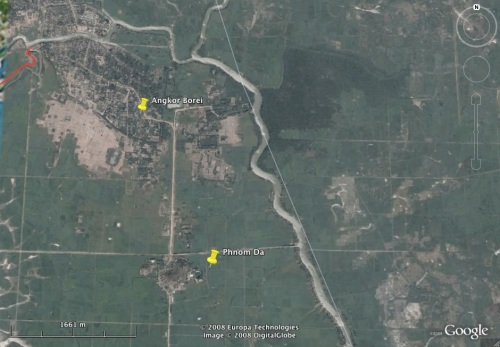 There are two temple sites on the mountain of Phnom Da: one called Phnom Da and another called Ashram Maha Rosei. They are both examples of some of the earliest sculpture and stone architecture in Cambodia and date to the mid-7th century AD. For more info on Phnom Da see:

Nancy Dowling 1999. A New Date for the Phnom Da Images and Its Implications for Early Cambodia Asian Perspectives: the Journal of Archaeology for Asia and the Pacific, Vol. 38, 1999

You can’t really see the temples from Google Earth but here’s what they look like on the ground.

Above: The massive brick and laterite Phnom Da 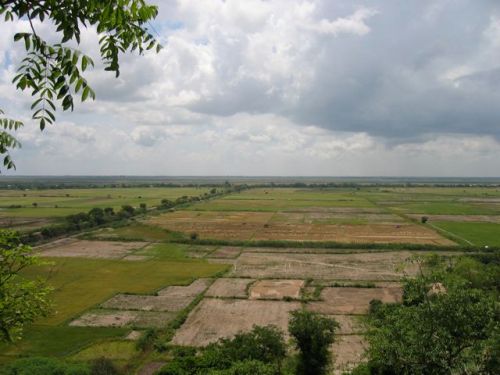 Above: Looking out onto the plains around Angkor Borei from Phnom Da.

I can’t wait to get back into the field down at Angkor Borei. This little trip down memory lane reminds me of why I find archaeology in Cambodia so fascinating. Below are a couple photos of the 2005 LOMAP team members who made this summer so fun and convinced me I definitely wanted to keep coming back.

10 responses to “Angkor Borei and Fun with Google Earth”