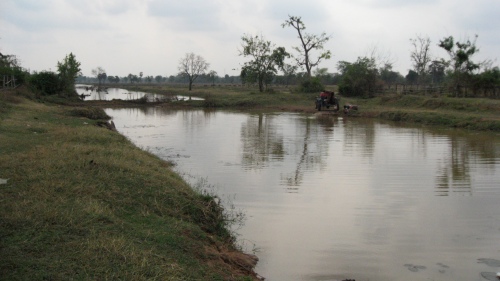 Above: An ancient (maybe?) canal near Banteay Chhmar temple in Banteay Meanchey province.

In April 1975 when the Khmer Rouge took power all of Phnom Penh was evacuated and hundreds of thousands of people were moved to the countryside to begin creating a perfect socialist agricultural economy, dependent on growing rice with the aim of producing two or three tons of rice a hectare.

As the IHT article succinctly writes:

The leaders of the Khmer Rouge were obsessed with canals, embankments and dams. They presided over hundreds of irrigation projects to revive Cambodia’s glorious but perhaps mythical past of an agrarian wonderland.

This myth of Angkor as an “agrarian wonderland” was perhaps spurred in part the writings of the the Chinese ambassador Zhou Daguan who visited Angkor in the late 13th century and wrote that Cambodians could produce three or four crops a year.  Even earlier Chinese visitors to Funan, around the 3rd century AD, describe the Cambodians as follows:

The devote themselves to agriculture.  The sow one year and harvest for three.

[More info on Chinese accounts of Cambodia can be found in this book].

I’ve talked about the canals around Angkor Borei before. The LOMAP team has worked to date one of the canals at Angkor Borei and found that the canal appears to have been constructed sometime between the first millennium BC to the mid-first millennium AD.  You can read more about the dating of the canal in this article: Bishop, P., D. C. W. Sanderson, and M. T. Stark. 2004. OSL and Radiocarbon Dating of a Pre-Angkorian Canal in the Mekong Delta, Southern Cambodia. Journal of Archaeological Science 31:319-336. Which can be found here.

When the French arrived and started mapping Angkor and the surrounding environment they noticed vast hydraulic systems.  Bernard-Philippe Groslier was the first to think about these hydraulic networks and hypothesized that they were used for agriculture and irrigation.    For a long time this hypothesis was challenged, primarily because some of the major water features at Angkor- the East and West Barays- had no obvious inlets or outlets that could be used for agricultural irrigation.  This led to a hypothesis that these water features were religions in nature and not functional. [For one take on this see Van Liere, W. J. 1980. Traditional Water Management in the Lower Mekong Basin. World Archaeology 11 (3): 265-280. Available via JSTOR].

That is until further work was done by Christophe Pottier and the EFEO; their extensive maps and research showed that the barays had inlets and outlets that were part of a larger agricultural irrigation system.    This research has been continued more by Damian Evans and the Greater Angkor Project who recently published an article about their work and the extent of the settlement at Angkor- you can read it here.   The image below is a portion of the map they produced and shows the extensive, complex water system-including canals- that existed during the Angkorian period.

From: Evans, Pottier, Fletcher, Hensley, Tapley, Milne, and Barbetti. 2007. A comprehensive archaeological map of the world’s largest preindustrial settlement complex at Angkor, Cambodia. Proceedings of the National Academy of Sciences of the United States of America 104 (36): 14277-14282.

From the same article:

Pottier also showed decisively that the great reservoirs, or barays, had inlets and outlets and were connected to a network of channels  and embankments, contrary to the assertions of critics of Groslier’s hydraulic thesis from the 1980s onwards (11–14). Moreover, the longstanding assumption (2, 11) that the extensive agricultural field systems visible on the surface today might date from Angkorian times was supported by his new map, which displayed the integral connection between the local temples and their agricultural space (15). Various other elements of the classical Angkorian landscape, in particular, the small ponds described in an account of Angkor in the 13th century (16), have also persisted on the surface, were clearly identifiable from the air and have often been renovated and reused by the contemporary Khmer population.

This is really really cool.  The Angkorian people dramatically and drastically changed the physical landscape of Cambodia in a way that you can still see on the surface today.  Using satellite images and radar is something that Damian Evans is still working on- I discussed it much earlier this year when I was doing survey with him and another colleague in NW Cambodia.  Using aerial photos are really helpful for this kind of archaeological work because many of these features are  hard to spot on the ground, unless you know what you are looking for.

So from this most recent archaeological research we know that the settlement area around Angkor was HUGE and that the Angkorian empire relied in part on a complex hydrological system.   Groslier hypothesized that a failure of this system led to the downfall of Angkor- something that also seems to be supported by the archaeological evidence.  Again I quote from the Evans et. al. PNAS article:

The new maps show that landscape modification at Angkor was both extensive and substantial enough to have produced a number of very serious ecological problems, including deforestation, overpopulation, topsoil degradation, and erosion. Whatever the functions of the infrastructural network, the impact of extensive clearance for rice fields, the economic and demographic consequences of constant modifications to the land- scape, and unpredictable events such as flooding or war fare would potentially have been extremely serious for such an elaborate and interlinked system. The Siem Reap river is now incised 5– 8 m into the Angkorian floodplain, and a major canal in the south of Angkor that postdates the 14th century CE is entirely filled with cross- bedded sands, indicating rapid movement of large quantities of sediment-laden water (8). There is also evidence, particularly in the newly mapped northern region, of ad hoc adaptations, breaches, modifications, and failures within this system, suggesting that it became increasingly complex and unmanageable over several centuries of development (Figs. 4 and 5).

This is something that the GAP team is continuing to investigate, but it is important to note that canals and irrigation systems take a lot of labor to produce and require constant maintenance.  Which is why so many of the Khmer Rouge era canals went out of commission.   Now they are being repaired by some of the same people who helped construct them originally.  From the IHT article I mention above:

The irrigation system in Baray, which is fed from water diverted from the nearby Chinit River, functioned for several years after the Khmer Rouge left power. But in the mid-1980s it fell into disrepair. It was only in 2005 that the government began rebuilding it. Today, the local municipality hires a maintenance crew to keep the water flowing.

Among the workers is Sim Vy, 48. As a teenager she was enlisted by the Khmer Rouge to help build the canals. She was told she was working for national glory but received only a watery gruel as recompense. Now she is paid $55 a month. “I prefer working this way,” she said. 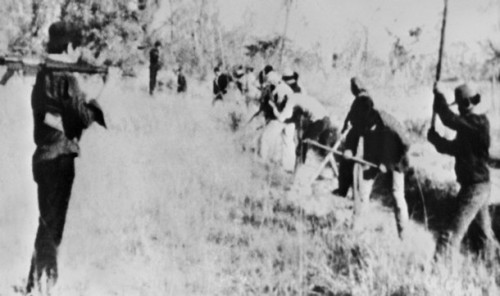 “This file photo taken 16 April 1976, shows people digging a water canal under the guard of an armed Khmer Rouge soldier taken in the Battambang Province, by a Cambodian who later fled and found refuge in France.” Via.

During the French colonial period there was also construction of canals (and filling in of areas in and around Phnom Penh).  However the scale was nowhere near as extensive as during the Angkorian period.  The next major change to the physical landscape in Cambodia was not until the Khmer Rouge period. The scholar Jeffrey Himel has been studying Khmer Rouge irrigation and wrote an interesting and detailed study that you can read here.   In this article he describes how the Khmer Rouge arranged a nationwide network of  irrigation canals arranged in a  grid or along UTM lines.  This was part of an overall strategy to collectivise the agriculture and by extension society.

Above: Workers building canals during the Khmer Rouge period from the book “The Murderous Revolution” by Martin Stuart-Fox. Via.

As Himel notes, this strategy was not particularly effective:

Examination of the irrigation works in the post-Khmer Rouge period has allowed clear definition of the many problems caused by the new system. The hydrology of the overall system was deeply flawed. Canals of tens of kilometers in length were dug connecting adjacent watersheds together. But this complex interweaving of canals and catchments was controlled by local cadre according to their immediate needs. Thus, there was no way to predict or adjust the effect of one canal or weir closing on the rest of the system nor any communication between those operating different parts of the system. The natural drainage patterns were badly disrupted and the new routes caused unexpected flows to occur that could not be predicted by the local people who had lived there for their entire lives.

Needless to say, these massive rice harvests were not achieved and thousands of people died of starvation.  However, as I mentioned above it now appears that some of these canals are being revived in the hopes of once again improving Cambodia’s rice harvest.   What is important to remember is that there is not an easy fix to this problem.    Himel concludes his paper nicely by stating:

The main lessons that can be summarized from the sad experience of Democratic Kampuchea serve as a confirmation of much that has evolved as modern irrigation practice, including:

1.  The importance of proper technical design and implementation.
2.  The need to identify innovative, competent and popular local leadership free of outside politics.
3.  The necessity for local adaptation, bottom-up planning and flexible approaches to irrigation and agriculture.
4.  Maintaining a step-by-step and learning approach appropriate to the capacity of the people
and agricultural system.

In addition to reviving some of the Khmer Rouge canals it seems that people are also starting to revive some Angkorian period water features as well!  The Phnom Penh Post reports on an Angkorian reservoir near Siem Reap that has been repaired and will provide irrigation for 9,ooo people in the area.

People in Cambodia have faced a constant struggle to manage their landscape since the Angkorian period and before.  There is not a “set it and forget it” solution to irrigation and agricultural production in Cambodia.  What is interesting is how people are learning from the past and adapting to it to fit their present conditions.

This entry was posted in Archaeology and tagged Angkor, canals, irrigation, Khmer Rouge. Bookmark the permalink.

7 responses to “Canals in Cambodia”