In case you missed it: Lidar is Magic: Part 1 , in which we learned that LIDAR is pretty great, but just one in a suite of tools used by archaeologists. And also, there are no lost cities.

The press coverage on the Cambodian Archaeology Lidar Initiative (CALI) has died down a bit now. While many  news outlets focused on the (false) lost city narrative, there were quite a few interesting discoveries presented in Damian Evans’ Lidar paper that I think are worth discussing in more detail. I present some of my favorite findings below in no particular order.

1. Earthworks that can be described as enigmatic

The lidar data uncovered/clarified several instances of earthworks whose function is not clear. One version of this are the “mound fields” or “dome fields” (see figure below).  Their presence was actually known prior to lidar, in fact I, with some colleagues, visited the series of mounds east of the East Baray in 2011. In addition to these, they have also been found on Phnom Kulen, the pre-Angkorian site of Sambor Prei Kuk, and west of Banteay Srei.

What makes these particular feature “enigmatic” is that there are very few ceramics and other artifacts associated with them. Evans(2016: 3) reports that excavations have also uncovered few material remains. This makes determining their function difficult, although they do appear to be associated with water features. You might notice in the image above that roughly in the center of this mound field is a small temple (square feature), called Prasat To.

Similarly “enigmatic” (in that material remains have not yet helped us understand their function) are the geometric linear patterns found around several temple sites.  These geometric square spirals were first identified in the 2012 lidar survey south of Angkor Wat. Interestingly, the new lidar survey identified even more of these features around the temples of Preah Khan of Kampong Svay and Beng Melea (figure below). My colleague in the APSARA Authority, Chhay Rachna, and his team have undertaken several excavations within the Angkor Wat spiral features and uncovered very few material remains. However, as part of our work at Angkor Wat last year,  several colleagues who are specialists in botanical remains and geoarchaeology collected samples from Rachna’s excavation units. I hope in the future this work will help elucidate the function of these spirals.

This is cool because until very recently, the sandstone quarries for constructing temples at Angkor were poorly understand. Since the late 1800s researchers had wondered about where the Angkorians were literally getting the building blocks for their empire. As recently as 2013, researchers Etsuo Uchida and Ichita Shimoda had discovered 50 new sandstone quarry locations, as well as a canal that might have been used in the transportation of these blocks.  The Lidar data shows that instead of having discrete quarry sites, there was instead a vast source of sandstone, with occasional surface outcrops.  This quarry field is now mostly buried, but has a specific signature that is visible on lidar.

The 2012 lidar data demonstrated that the (often) forested areas surrounding temples in the urban core contained planned residential areas. [Indeed investigating this habitation has been the focus of research by the Greater Angkor Project and I’ve written about this work here and here, see also this recently published article]. The new lidar data shows similar patterns within temple enclosures outside the urban core. Additionally, in our fieldwork we’ve noticed a difference between the organization of residential areas within Angkor Wat and Ta Prohm. This difference seems to extend to temples constructed during the early 12th century (Suryavarman II period) and the later 12th century (Jayavarman VII period) as is clearly depicted in the image below.

4. Implications for the “collapse” of Angkor and the post-Angkor period

There is an oft-repeated narrative regarding the decline and fall of Angkor, in which Angkor fell to the Siamese and Angkor was abandoned as people fled south to the region around Phnom Penh, with rulers reestablishing their capital in this location. Archaeological work by GAP and others has been pushing back on this narrative and indeed the “collapse” of Angkor is much more complicated than a simple military defeat. The idea that Angkor was abandoned is also one that needs further scrutiny. In the new lidar paper, Damian Evans (2016:9) discusses this idea more:

If the Post-Angkorian period involved the sudden movement of hundreds of thousands of non-farming urbanites from the ‘downtown’ area of Angkor to the post-Angkorian capitals…then this great ‘diaspora’ should be reflected in the density and/or extent of the urban centres that immediately succeeded Angkor.

We know what the densely occupied cities of Angkor looked like (see temple cities image above) and we’d expect that people would continue this pattern when constructing new cities around Phnom Penh.  However, what the lidar data showed is that the post-Angkorian capitals of Longvek and Oudong do not show a similar densely occupied residential pattern as we see at Angkor. 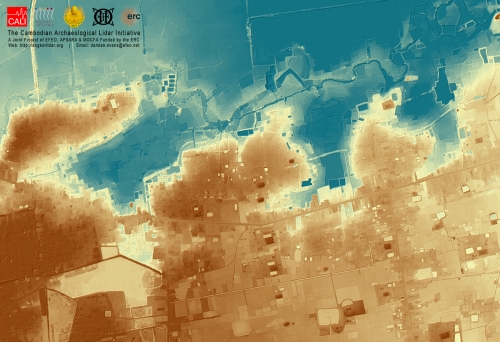 While there seems to have been a socio-political shift in power from the Angkor region further south, there does not appear to be a similar demographic shift in the rest of the population. The post-Angkor period is poorly understood, but there are some currently and hopefully future projects focusing on this period, which we hope will shed light on developments after Angkor in Cambodia.

What is your most exciting find from the recent lidar survey? Or what questions do you have after seeing this new data? Add them below in the comments.

This entry was posted in Archaeology. Bookmark the permalink.